No god! No state! No patriarchy!

2015 – What a year! Conchita Wurst is a star, the song contest took place in Vienna and there was the annual celebration of the Life Ball. The Vienna Pride takes place the twentieth time. There are – certainly just in the touristic parts like the inner city – lesbian, gay and heterosexual traffic light couples ("Ampelpäarchen") and there are some rainbow flags at trams in Vienna. One would like to show the city as an open-minded one. But a brief look behind the veneer shows: There are fierce reactions against any form of equalization and anti-discrimination, dominated by sexism, racism and LGBTIQ (lesbian, gay, bisexual, transsexual, inter, queer) hostility.

Just like in the last years, diverse Christian fundamentalist and clerical fascist groups are mobilizing for the “March for the Family” (“Marsch für die Familie”) as a protest against the Vienna Pride. The picture of "family", they are referring to, is only including "a father, a mother and children". Further it should form the "nucleus of the state" and should serve the traditional, patriarchal maintenance of power. Sexuality is only allowed – according to the ideology of Christian fundamentalists – for reproduction, birth control and abortions are consequently dismissed. This isn't just the expression of a women*hostile ideology, but rather that of an ethnic-rascist "demographic-policy". The assisting bishop (also called suffragan bishop) Laun makes clear what the issue is: “If Europe exterminates its population, it will become a huge retirement home. A vacuum will arise, other peoples will advect into that.“ So the issue is the “rescue of the Christian West” and that fits perfectly to the racist hustle of the FPÖ or campaign of neo-nazis and fascists which fabulate of “Umvolkung” (or more compatible with media, but with the same meaning) “exchange” (“Austausch”).

To assess the opinions and claims of Christian fundamentalists and clerical fascists as ridiculous, would be fatal. The reality shows that a huge part of the parliamentarians share these views in many points. A planned equity-protection for LGBTIQ persons, so they would have been able to defend against discrimination for example in restaurants, got prevented by the ÖVP ,with support of the right-conversative male society “Cartell Verband” (CV). Family- and relationship-constellations, which don't correspond with the wished “nucleus of the state”, consequently don't get any equity. There is still a disease mongering of transgender persons and they get hazed by laws and caprice. Street harassment and certain sexual assaults against women get trivialized and even called acceptable. The racist and inhuman “asylum laws” affect, in combination with the present LGBTIQ harassment, refugees who had to flee because of their sexual orientation or gender identity much harder. To summarize: Many parties in the Austrian parliament, the ministries and administrative bodies are working for a racist, hetero-normative, cis-sexist and patriarchal maintenance of power.

Pro Choice is everything!

The catholic church (which still holds a huge amount of property in Austria and has access to enough financial resources), its advocates and supporters don't get tired to attack „the abortion on demand“, which is, under certain conditions, a way to have an abortion without being penalized. They demand a complete prohibition of abortions, well aware that that would make many women* pay with their life. The role for women* is apparent: They should give birth, stay at “stove and home” and raise children. Pro Choice is a “sin” for them and the “willingness to fertility” an obligation.

Even the smallest steps in the direction of equality, autonomous life (if that is possible in this society) or anti-discrimination, results in an outcry of disgust by the reactionary powers. Immediately there is talk of “decline in moral and values”. The “values” they are talking of, are the stick in the mud dogma of a supposed “naturalness”. All persons which can't or won't be shelved, are hated and have to be fought. That's a fight about power and the maintenance of power.

Naturally feminists – particular those who are recalcitrant, loud and not pleased with the thrown breadcrumbs – suit well as an enemy stereotype. (Queer)Feminism gets denoted as “gender-terror” or “gender-mania”. This anti-feminism forms an important interface between (clerical) fascists, neo- nazis, right wing conservatives, right extremists and even provides enough links for the liberal spectrum. In their many articles they (mostly white cis-men) get exited about the insolence of feminist claim. In the process they use words with ease which were shaped in a right and extreme right context. The retention of patriarchal privileges forms the basis for (aware an unaware) alliances, which go beyond the usual. United they form a massive anti-feminist and anti-emanzipatory backlash.

In the last year there were attacks against LGBTIQ at and around the Vienna Pride. The number of anti-semitic and racist attacks raises constantly. The racist agitation and inhuman political practice against refugees gets more severe. The hostile voices against women* and LGBTIQ-persons get louder. Society's swing to the right gets sharper. Still one thing has to be clear on our minds, we won't remain in silence. We will continue to fight against sexism, racism, anti-semitism and LGBTIQ hostility. Don't watch and remain silent, be loud and oppose! For a free and solidary cooperation!

My Body - My Choice! 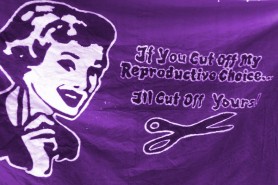 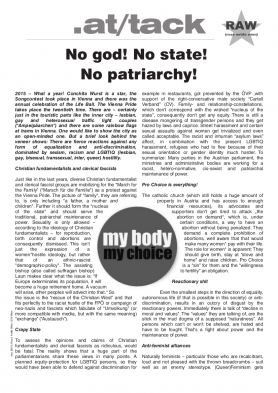 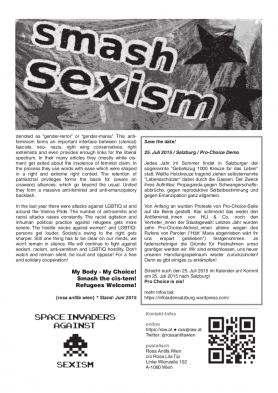