Pride is about celebrating! It's about fun and necessary visibility of LesBiGay, transgender, intersex or queer lifestyles. But in whose name are we celebrating when racist door policies characterize the party scene, LGBTIQ¹ refugees are deported and the representation of the parade is dominated by "white" male principles? Do we really want to make ourselves (more) popular with a still homophobic society by reproducing their racist exclusionary mechanisms and projections? Racism within the LGBTIQ community should be more of a topic at the parade, and would give it more political impact. It could also become a more comfortable space for many who have felt neither welcome nor represented until now.

The rainbow parade is not just a place for celebration, but also a demonstration, an expression for the demands of the LGBTIQ community. Don't meter-long advertisement banners from drink companies, transport services, etc. eclipse political themes?

But also apart from the parade, the LesBiGay scene is increasingly commercial. LGBTIQ households less often have children to provide for— also because it is legally difficult or impossible —, leaving more money for lifestyle. They thus represent a lucrative target group for corporations. In principle, sexual orientation or identity don't matter, as long as the purchases add up. What goes hand in hand with the "discovery" of this target group is superficial tolerance for LesBiGays, but not a total acceptance of non-heterosexual lifestyles. Especially gay couples are interesting as potential customers, since men* still earn more than women* doing the same job.

Do we really want to be reduced to consumers? Let us live out our desires beyond a heterosexist norm, no matter our buying power!

Gay marriage, adoption rights, legal equality – the LG(BTIQ) Community calls these rights "first-class rights" – yes, they are indeed "first-class". For people who have the right passport, the right job, the right relationship, who are "normal." The political goals of the LG(BTIQ) movement seems to be the ultimate assimilation to a "white," heterosexual, patriarchal, bourgeois society. We have families, kids, houses, and dogs just like you! We are just like you!

But what about those of "us" who do not find themselves represented in these categories? The sex workers, those living in polyamorous relationsships, the homeless transgenders, the queers without papers – where is space for all that in your political efforts?

Equal rights for everybody – but really everybody this time, okay? 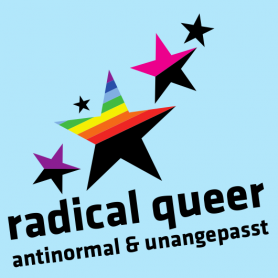